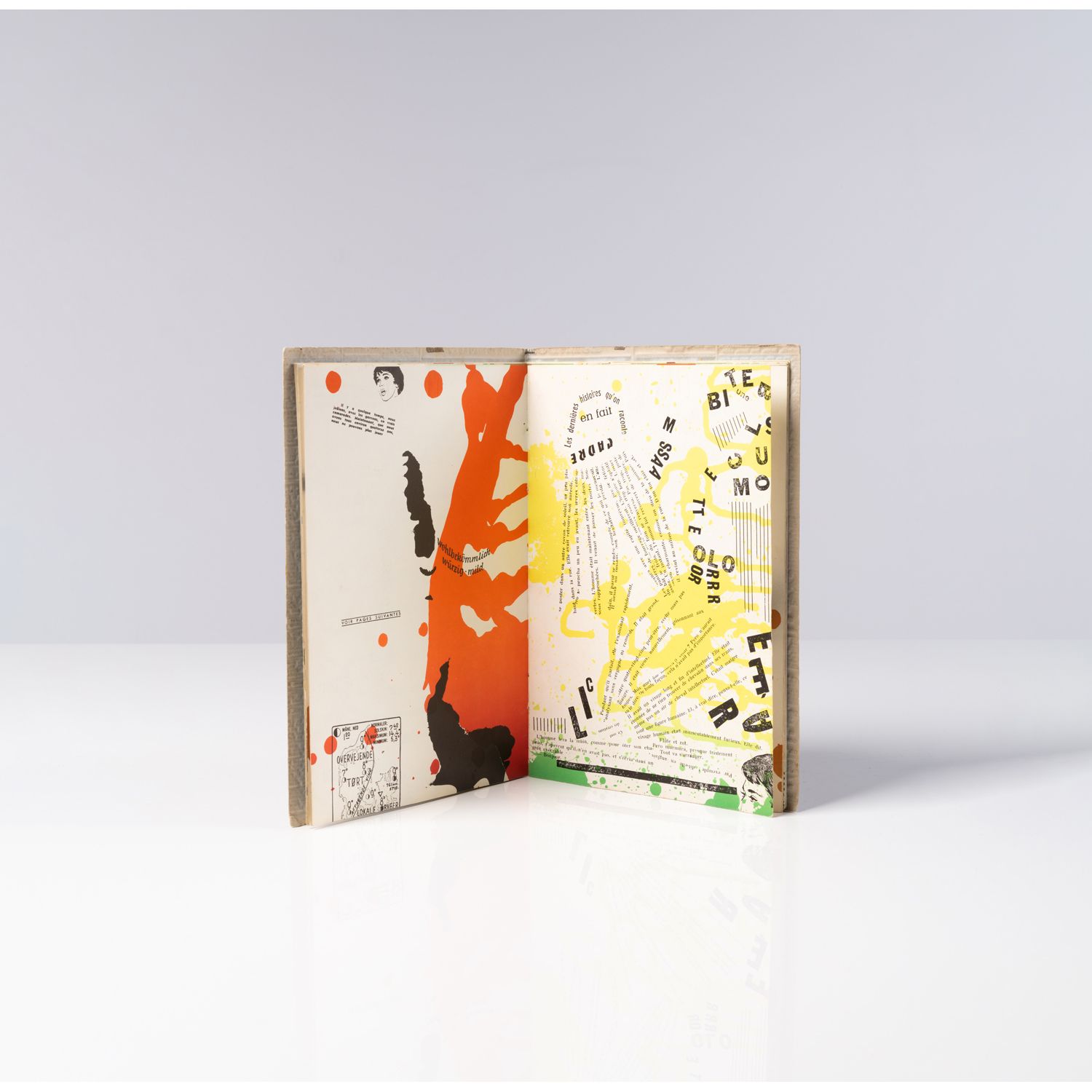 Memoirs. Copenhagen, Permild & Rosengreen for the Situationist International, [1959, i.e. 1958].In-4 [276 x 210] of (34) ff. the first and last blank: paperback, filled sandpaper cover, under rhodoid.First edition: it was printed in Copenhagen at the end of 1958.Second work published jointly by Guy Debord (1931-1994) and the Danish painterAsger Jorn (1914-1973), after Fin de Copenhague (1957)."Entirely composed of prefabricated elements", the work was realized during the winter 1957- 1958. The elements collected in literary works, newspapers, etc., were glued and then photographed and entrusted to Jorn so that he could draw "colored lines of a rather great complexity that would form the supporting structure" (Correspondence, volume I, pp. 24-25).Famous "anti-book" whose cover is a piece of sandpaper - a "book of love," Jorn would say, bound in sandpaper, which tears the pocket of entire library shelves, in good memory of the past time that refuses to end, and distresses everyone by its obstinate presence."Perfectly preserved copy.

Auction is over for this lot. See the results
Security
Online payments are secured by Ingenico and encrypted transactions.
Guarantees
Each lot has been authenticated and appraised by an Auction House.
Support
Consult our FAQ or contact us
Composed of several subsidiaries, the Drouot Group is a major player in the art market. Hôtel Drouot, located in the heart of Paris, has been the world's largest public auction center since 1852. 15 salerooms are available to more than 70 auction houses. The emulation generated by an annual offer of 230,000 artworks from 21 major specialities - from Antiquity to street art - attracts some 3,000 visitors every day. The Group's digital platform, Drouot.com, offers digital sales - Live auctions (live broadcasting and participation in auctions), Online-only auctions (dematerialised auctions) and Buy Now sales (sales of lots at fixed prices). Nearly 2 million items are offered annually by 600 auction houses. Auction news is reported every week in La Gazette Drouot, the leading weekly magazine for the art market and culture published by Auctionspress.
More about Drouot
Drouot certified auction houses
Services to sales operators
To buy
How to buy on Drouot.com
How to buy at the Hôtel Drouot
Glossary
Useful links
To sell
Value your property
Auctions at the Hôtel Drouot
Subscribe
Drouot.com services
Live auctions / Timed online auctions
Advertise on your auctions
Contacts
HÔTEL DROUOT
9, rue Drouot 75009 Paris, France
+33 (0)1 48 00 20 00
contact@drouot.com