Back to Catalog > The Empire at Fontainebleau... 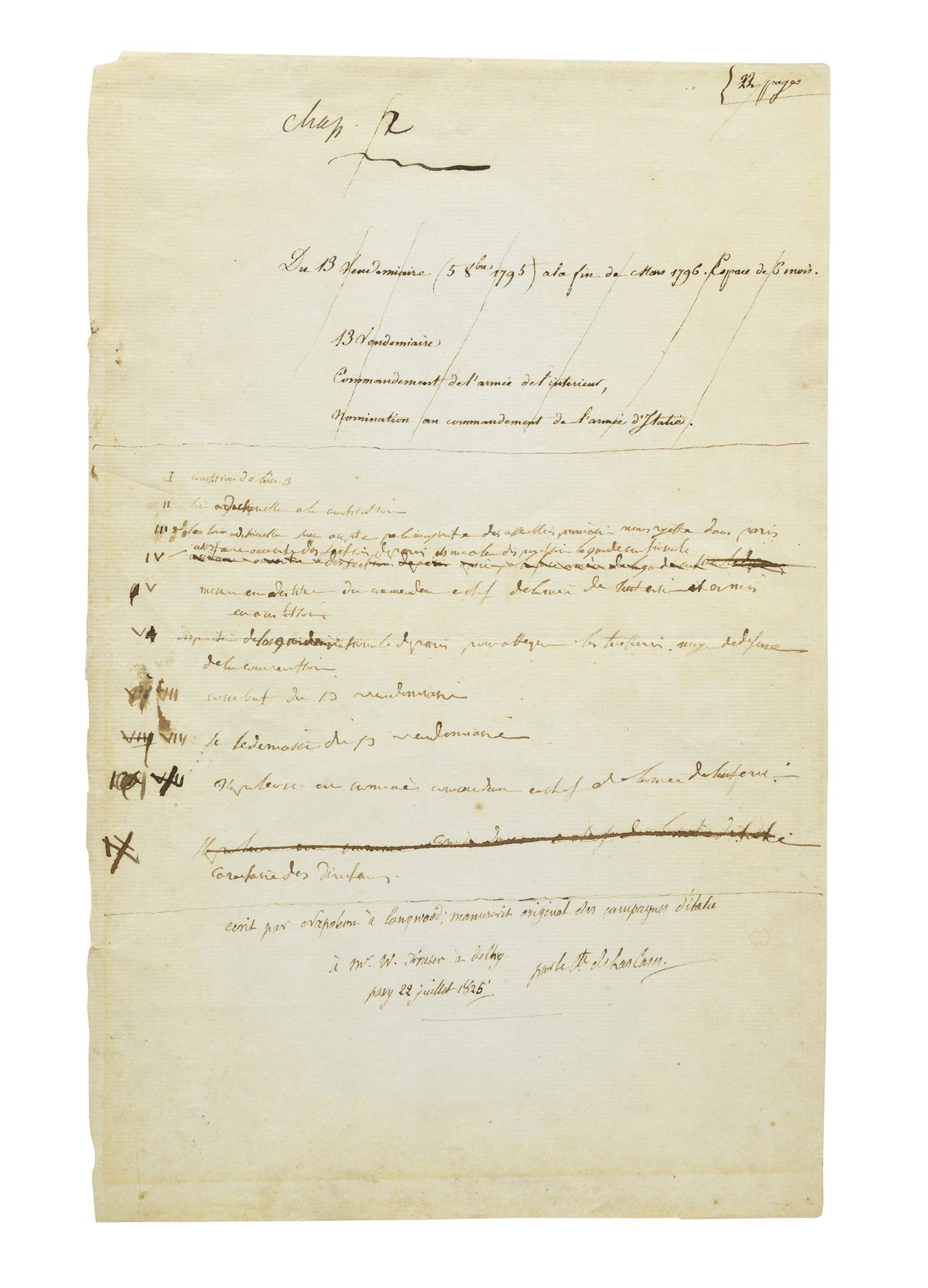 THE DEATH OF EMPEROR NAPOLEON III Set of four souvenirs: Small frame commemorating the death of Emperor Napoleon III. -Photomontage calling card, of the Emperor on his deathbed. "Room where Napoleon III died on January 9, 1873." 10 x 7 cm. - "Violet and immortal taken on the deathbed of the Emperor and placed in his hand by Baron Tristan Lambert who gave them to me. Presented with autograph envelope. In a rocaille frame lacquered black and gilded. -Two pages of the newspaper "The Graphic" of January 25, 1873 reporting the funeral of Emperor Napoleon III. Illustrated. 39 x 26 cm. -Two engraved reductions of the pages of the newspaper " l'Ordre " by Goupil and Hermann. With an account of the funeral and a list of the people who attended it. 22 x 16 cm. B.E.

NAPOLEON I. Autograph manuscript signed "Napoleon" in the text, with an autograph apostille signed by Emmanuel de Las Cases (father) and a few lines in the hand of his son. Sainte-Hélene, s.d. 1/2 p. in-folio. VERY PRECIOUS AUTOGRAPH MANUSCRIPT OF NAPOLEON IER FOR HIS MEMOIRS WRITTEN IN SAINTE-HÉLENE. Primitive version of the plan of a part of the Memoirs, corresponding to the summary of the text entitled " 13 vendémiaire ", appeared as chapter III of the part " Guerre d'Italie " in the edition of 1823 (Mémoires pour servir à l'histoire de France sous Napoléon Ier, t. III), then as autonomous part in the edition of 1869 (Correspondance de Napoléon Ier, t. XXIX). The printed version would keep the same chronology but in different subdivisions. Bonaparte savior of the Republic during the insurrection of the 13 vendémiaire (October 5, 1795). Considering that a majority of the French marked hostility towards the Terrorists, and observing the collapse of the Jacobin movement after the aborted coups of germinal and prairial, the royalists could cherish the hope to win the elections soon. The Convention having then taken an electoral decree guaranteeing him the renewal of a republican majority, they tried a military coup d'état on vendémiaire 13 by leaning on about thirty Parisian sections. The Convention entrusted its defense to Barras, who was first seconded by Menou, ineffective and soon replaced by Bonaparte, who had given proof of republicanism during the siege of Toulon. Bonaparte proved again his determination and his abilities by seizing the guns of the Sablons camp in Neuilly, which allowed him to stop the insurgents in front of the church of Saint-Roch by machine-gun fire. This success confirmed the good fortune of Bonaparte, who kept for a long time the nickname of "General Vendémiaire" that the royalists gave him. On the present page, the son of Las Cases, who occasionally served as secretary to Napoleon I, at Sainte-Hélène, had first written a title with a three-point summary: "From the 13th of Vendémiaire (5 8bre 1795) to the end of March 1796. Space of 7 months. 13 vendémiaire. Commander of the Army of the Interior Appointment to the command of the Army of Italy." The emperor then crossed out this text, and inscribed below this expanded version: "I. Consti[tu]tion of the year 3. II. Additional laws to the Constitution. III. The additional laws are accepted by the majority of the primary assemblies but rejected in Paris. IV. Open resistance of the sections of Paris, they have at their disposal the National Guard. V. Menou is removed from the commander in chief of the army of the Interior and is put under arrest. VI. Arrangements of the National Guard of Paris to attack Les Tuilleries. Put in defense of the Convention. VII. Fight of the 13 vendémi aire. VIII. The day after the 13 vendémiaire. IX. Napoleon is named commander-in-chief of the army of the Interior. X. Character of the Directors." "Napoleon named comandant-in-chief of the army of Italy," written and then crossed out by Napoleon. THE MEMOIRS OF NAPOLEON, OR THE PROMISE KEPT OF THE FAREWELL OF FONTAINEBLEAU. Napoleon I had said in 1814 to his last faithful: "I will write the great things that we have done together", and would say again to Las Cases at the beginning of August 1815: "We will write our Memoirs. Yes, it is necessary to work, the work also is the false of time. After all, one must fulfill one's destiny, it is also my great doctrine. Well then! Let mine be fulfilled". Conscious of the major place he had occupied in the history of his time, he devoted long hours in Sainte-Hélène to dictating - more rarely writing - the account of his campaigns, and military and political analyses of his time. These autobiographical and historiographical texts, written in the third person, form a veritable sum of major interest for understanding his thought. A great historical work and a monum ent to his legend. Far from the power, the fallen monarch tried to shape his image for the posterity, he who had known how to play in master of all the means of communication to impose his public character of victorious revolutionary general, of first consul pacifier and legislator, then of omnipotent and beneficent emperor... A REAL EDITORIAL ADVENTURE: the publication of these "memoirs" took place in several stages, from 1820 to 1869. They were first published in partial editions by Gourgaud in 1818, O'Meara in 1820 and Las Cases in 1823. In a way that was not yet exhaustive, and in an upset chronological order, a very large edition was given in 1823-1825 under the title of Mémoires pour servir a l'histoire de France sous Napoléon Ier, republished in 1830 in a restored chronology, while the part devoted to Egypt, which remained unpublished, appeared separately in 1847. The whole was republished by Pet

Auction is over for this lot. See the results
Security
Online payments are secured by Ingenico and encrypted transactions.
Guarantees
Each lot has been authenticated and appraised by an Auction House.
Support
Consult our FAQ or contact us
Composed of several subsidiaries, the Drouot Group is a major player in the art market. Hôtel Drouot, located in the heart of Paris, has been the world's largest public auction center since 1852. 15 salerooms are available to more than 70 auction houses. The emulation generated by an annual offer of 230,000 artworks from 21 major specialities - from Antiquity to street art - attracts some 3,000 visitors every day. The Group's digital platform, Drouot.com, offers digital sales - Live auctions (live broadcasting and participation in auctions), Online-only auctions (dematerialised auctions) and Buy Now sales (sales of lots at fixed prices). Nearly 2 million items are offered annually by 600 auction houses. Auction news is reported every week in La Gazette Drouot, the leading weekly magazine for the art market and culture published by Auctionspress.
More about Drouot
Drouot certified auction houses
Services to sales operators
To buy
How to buy on Drouot.com
How to buy at the Hôtel Drouot
Glossary
Useful links
To sell
Value your property
Auctions at the Hôtel Drouot
Subscribe
Drouot.com services
Live auctions / Timed online auctions
Advertise on your auctions
Contacts
HÔTEL DROUOT
9, rue Drouot 75009 Paris, France
+33 (0)1 48 00 20 00
contact@drouot.com