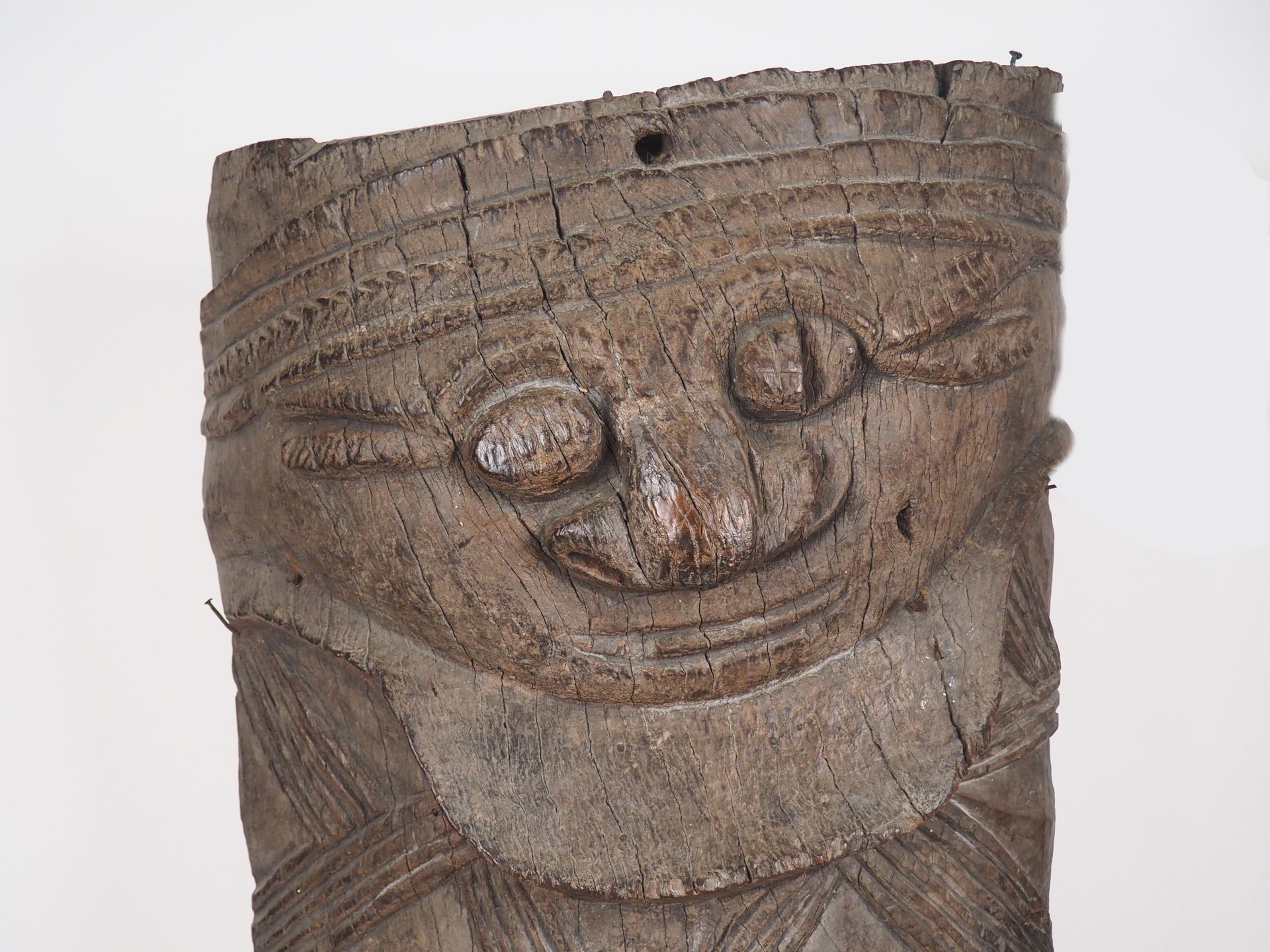 Kanak jöpwö hut door light, New Caledonia. Hardwood with dark brown and black patina H. 157,5 cm . Period : 19th century Provenance : - Collected in situ around 1900 by Armand Victor de Lartigue (1860-1931), an officer in the French Navy. - Transmitted by family descent Among the Kanak, the symbol of power is entirely concentrated in the house given to the chief by the elders of the country's families. This "Big House" is in its very architecture the representation of the society organized around the chief, intercessor between the living and the spirits of the ancestors. The sculptures that adorn the door are an evocation of the ancestors' view of the country, legitimizing the power of the living. (In. Carnets Kanak - Voyage en inventaire by Roger Boulay, page. 28) Of major symbolic significance in the vernacular culture, the sconces adorned the doorways of Kanak ceremonial houses on both sides. Early explorers, including Cook and d'Entrecasteaux, attested to the quality of these sculpted bas-reliefs, which also attracted the attention of observers in the early years of the 20th century, such as the naturalist Fritz Sarasin, whose photograph taken in 1910-1911 illustrates the continuum of architectural decoration. A powerful evocation of the figure of the ancestor within Kanak culture, this work also bears witness to the vigor of its aesthetic canons. Under a forehead where the short chevron link of a sling's cord can be guessed, the gaze is inscribed under a marked arch of the eyebrows. The nose, powerful, contrasts with the double indentation of the mouth, sketched. The opening at the top allowed the sconce to be connected to the eaves purlin and the tower posts of the architecture with the help of vines. The lower two thirds, decorated in bas-relief with a succession of skilful interlacing, evoke the ligatures holding the deceased ancestor, wrapped in a plant shroud. This beautiful tangle of four ties joined by strands is remarkable in its sculpture, as in the realism of its design. This mortuary practice is described in late 19th century literature: "The men line up in a circle and pass the dead man wrapped in mats from hand to hand" (Docteur Vincent, 1895, In. Kanak - Art is a Word, page 272). Only the head of the ancestor whose presence is commemorated protrudes from this vegetable shroud, as here. The base of the work, eroded and without decoration, was for its part stuck into the ground, sometimes to a depth of twenty centimeters. It was more accurately held in place by the stones that make up the mound of the hut (In. Roger Boulay, La grande case Kanak, page. 283) Confirming that our example belongs to the corpus of ancient sconces, we note its natural convexity. The cyclonic attacks in particular, weakened the large trees, and favored the hollowing out of their heart. Once on the ground, these curved pieces of wood, that their fall in a fungal environment finished marking, were taken and worked, the rounded volume preserved. It was from the introduction of Western tools in New Caledonia that rectilinear sconces were made. Preserved in the same private collection for more than a century, this work-memorial, intended to keep close the protection of the ancestor, is a precious testimony of the Kanak culture, which has come down to us today. Bibliography : Docteur Vincent, Les Canaques de la Nouvelle-Calédonie, esquisse ethnographique, Paris, A. Challamel, 1895 Carnets Kanak - Voyage en inventaire by Roger Boulay, Editions Musée du Quai Branly Jacques Chirac, Paris, 2022 Kanak - Art is a word, Editions Musée du Quai Branly Jacques Chirac/Acte Sud, Paris, 2013 Roger Boulay, Hùp - Ethnologie et esthétique de la statuaire de la Grande Case kanak, Editions de L'Etrave, Igé, 2022 Roger Boulay, La grande case Kanak, Les rapports entre architecture et sculpture en Nouvelle, PhD thesis, University of Paris I, Panthéon Sorbonne, 1986 Roger Boulay, La maison Kanak, Collection Architectures traditionnelles, Parenthèse - A. D. C. K. - Orstom, Marseille, Nouméa, Paris, 1990 Collected in situ around 1900 by the naval officer Armand Victor de Lartigue (1860-1931) Expert : Emmanuelle MENUET, Member of SFEP +33 06 70 89 54 87 - emenuet.expertises@gmail.com

A late 18th-early 19th century yellow gold and silver pendant, set with a miniature of a love with a dove, surrounded by enamel and a crown of rose-cut diamonds. H. with the bélière : 4,7 cm Dim. without the setting: 3 x 2.7 cm Weight: 9,09 g

Articulated necklace in platinum, decorated in its center with flowers and branches set with diamonds and a pear-shaped diamond in pendant. Articulated chain punctuated with rose-cut diamonds set in a closed setting. Carries a number: 12685 Length: 39,5 cm Weight such. 15,47 g

Security
Online payments are secured by Ingenico and encrypted transactions.
Guarantees
Each lot has been authenticated and appraised by an Auction House.
Support
Consult our FAQ or contact us
Composed of several subsidiaries, the Drouot Group is a major player in the art market. Hôtel Drouot, located in the heart of Paris, has been the world's largest public auction center since 1852. 15 salerooms are available to more than 70 auction houses. The emulation generated by an annual offer of 230,000 artworks from 21 major specialities - from Antiquity to street art - attracts some 3,000 visitors every day. The Group's digital platform, Drouot.com, offers digital sales - Live auctions (live broadcasting and participation in auctions), Online-only auctions (dematerialised auctions) and Buy Now sales (sales of lots at fixed prices). Nearly 2 million items are offered annually by 600 auction houses. Auction news is reported every week in La Gazette Drouot, the leading weekly magazine for the art market and culture published by Auctionspress.
More about Drouot
Drouot certified auction houses
Services to sales operators
To buy
How to buy on Drouot.com
How to buy at the Hôtel Drouot
Glossary
Useful links
To sell
Value your property
Auctions at the Hôtel Drouot
Subscribe
Drouot.com services
Live auctions / Timed online auctions
Advertise on your auctions
Contacts
HÔTEL DROUOT
9, rue Drouot 75009 Paris, France
+33 (0)1 48 00 20 00
contact@drouot.com