Back to Catalog > Asian Art... 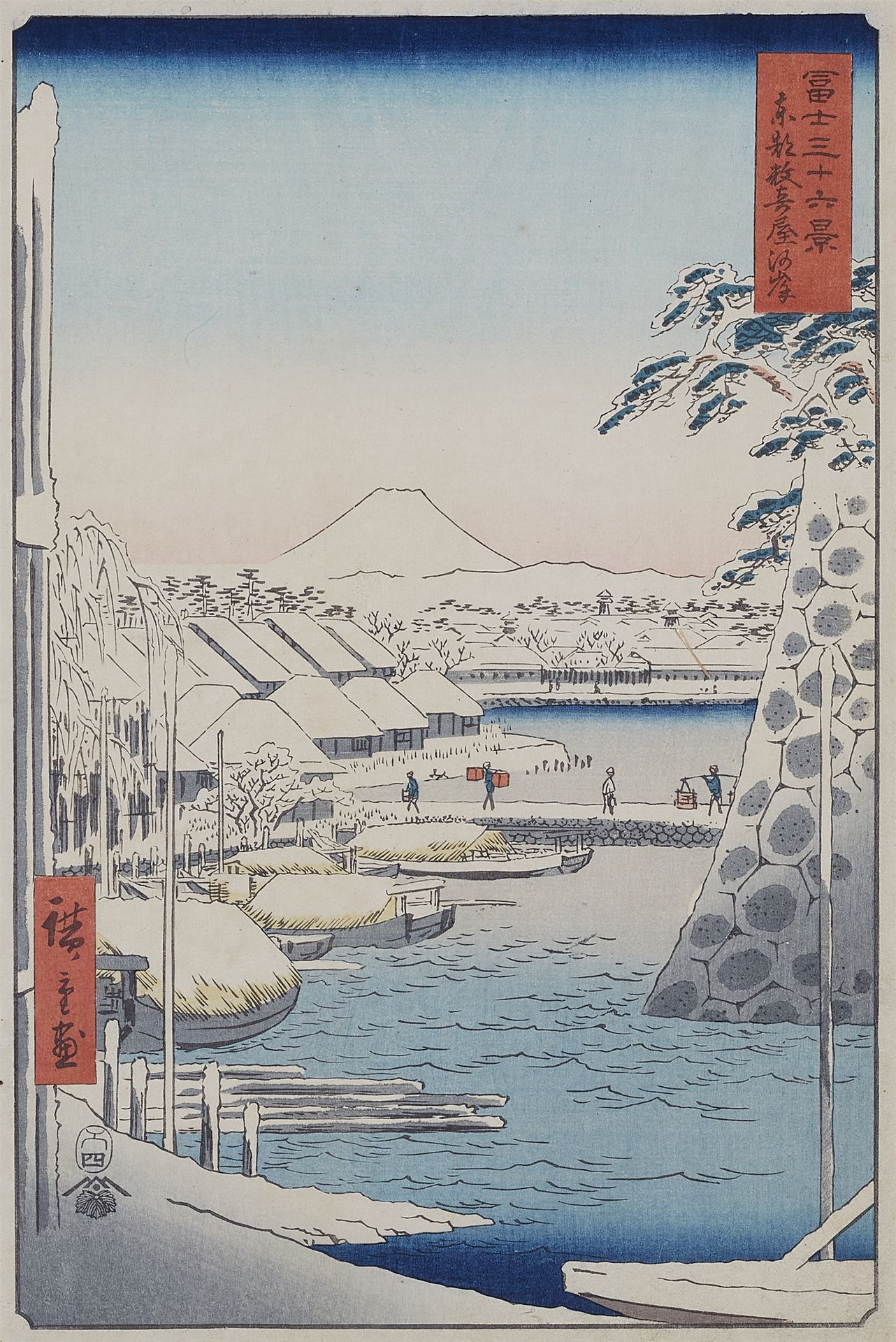 Hokusai Katsushika (1760-1849) after, Lake Hakone in the province of Sagami, Japan, Print from the series of "36 views of Fuji" - Fugaku sanjûrokkei. Sight size : 25,5 x 36,5 cm + the frame, around 1900 The shores of Lake Ashinoko, rich in commercial activities, were very popular at that time. Hokusai chose to represent in this print a landscape devoid of any human or animal representation. Only the blue roofs of a Shinto shrine can evoke a human presence. Here the artist favors the silent serenity of curving hills and curved sheets of mist, from which the triangle of Mount Fuji emerges in the background.

Japanese school of the early 20th century. After HIROSHIGE UTAGAWA (Tokyo, 1797 - 1858). "Snow Scene on the Kiso Road". Lithograph. Signed. It has three holes in the paper and some folds at the ends. Measurements: 36 x 25 cm. Hiroshige Utagawa, artistic pseudonym of Hiroshige Ando, was a Japanese painter and engraver born in Edo, present-day Tokyo, considered today the last great master of the ukiyo-e tradition (Japanese woodcut). He was a pupil of Toyohiro at the Utagawa school and attained mastery around 1812. The young artist furthered his training by studying the traditional Chinese-influenced painting techniques of the Kano school, as well as the realism of Shijo school painting and the perspective techniques of Western painting and uki-e (a genre of ukiyo-e that employs linear perspective). His apprenticeship work included numerous illustrations for books, and also prints depicting beautiful women and kabuki actors in the style of the Utagawa school. Around 1831 he published his series of prints "Ten Famous Places in the Eastern Capital", modelled on Hokusai's views of Fuji, which had seen the light of day shortly before. The following year, in 1832, he was invited to take part in the official procession along the road between Edo and Kyoto, which enabled him to travel the Tokaido route linking the two capitals. He made numerous sketches during the journey, which eventually resulted in the series "The Fifty-three Stations of the Tokaido", which contains some of his most famous prints. Hiroshige's works are now held in some of the world's leading collections, including the Metropolitan Museum in New York, the British Museum in London, the Hermitage in St Petersburg, the Art Institute of Chicago, the Rijksmuseum in Amsterdam, the National Galleries of Denmark, Finland and Hungary, the Tikotin Museum of Japanese Art in Haifa (Israel) and those of Japan's most important museums.