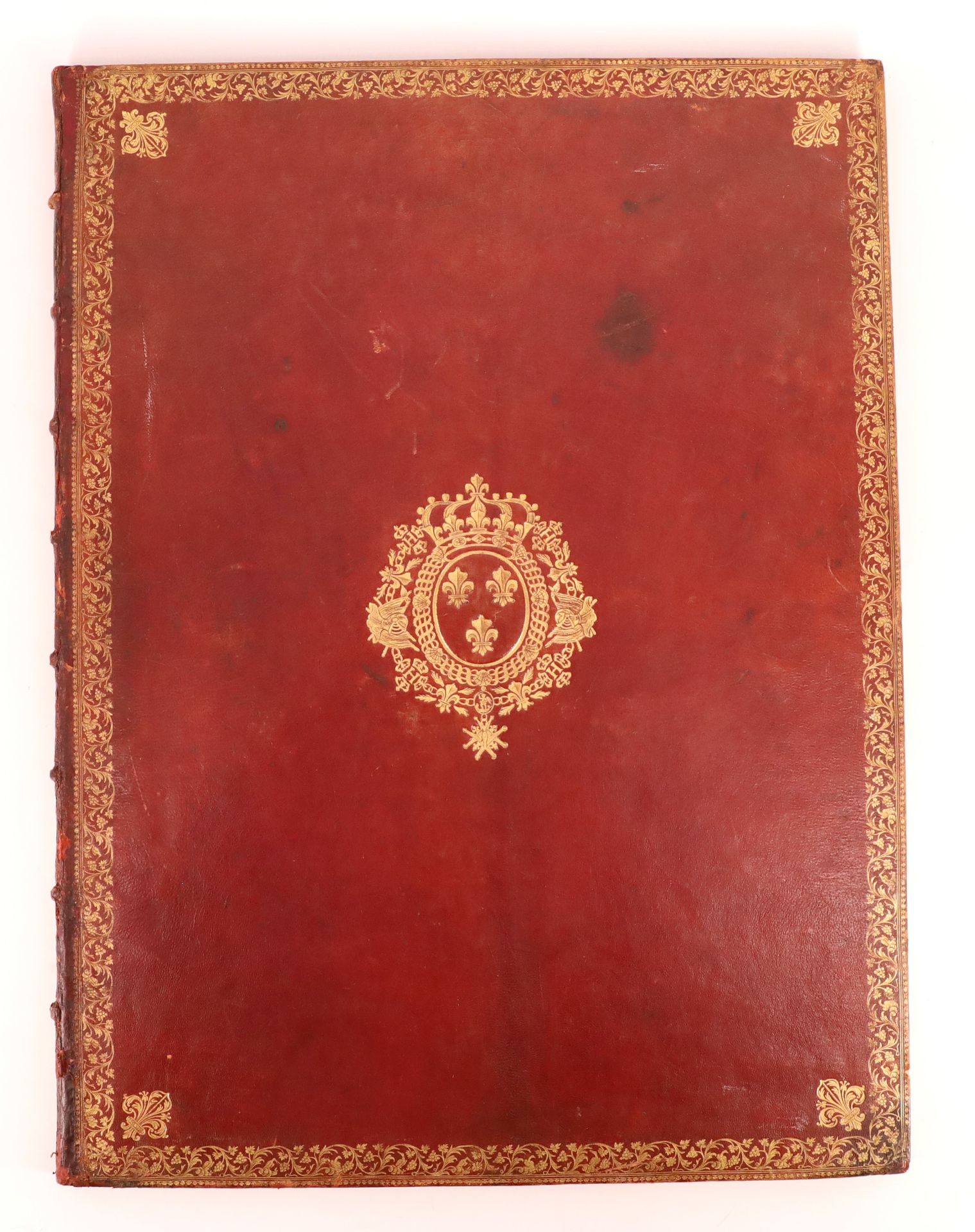 [Le Havre]. Relation de l'Arrivée du Roi au Havre de Grâce, le 19 septembre 1749 et des fêtes qui se sont données à cette occasion. In Paris, chez Guerin et Delatour, 1753, in-folio bound in full red morocco with the arms of Louis XV, large framing roulette with vine decoration on the boards, fleur-de-lis on the four corners, and roulette on the edges, gilt edges, spine with maroon title-piece. The binding has undergone several restorations including a reassembly of the original boxes on a leather. The old leather, very dry and tending to blot, shows in some places the modern leather. The rest of the binding shows some scratches, leather jumps, epidermal marks or small stains, but not very serious. The spines remain worn, however, one of them being slightly cracked. The text is fully engraved. The work, which has been washed and rebound, is illustrated with a title vignette, 2 bands and a large cul-de-lampe, drawn by Slodtz and engraved by Le Bas, engraver of the King's Cabinet. It also contains six double plates mounted on tabs, size 63x50cm, drawn by Descamps, professor of drawing at the Royal Academy of Rouen and engraved by Le Bas. The plates represent "The Arrival of the King in the Havre de Grace, whose keys are presented to his Majesty, at his entrance, by the Duke of Saint-Aignan, governor, at the head of the Magistrates"; "The Carenne of a ship in the Basin of the Havre in the presence of the King"; "The King, on the balcony of the Cazernes of the Navy of the Havre, seeing the execution of different maneuvers and a joust"; "The illumination of the Grand Rue of the City of Le Havre de Grâce and of a ship placed at the entrance of the port to complete the perspective"; "The King on the Beach of the Rade of Le Havre, seeing three ships launched into the sea and representing a naval combat"; "The King on the High of Ingouville, from where his Majesty observes the beautiful point-of-view of the city of Le Havre de Grâce".

Auction is over for this lot. See the results
Security
Online payments are secured by Ingenico and encrypted transactions.
Guarantees
Each lot has been authenticated and appraised by an Auction House.
Support
Consult our FAQ or contact us
Composed of several subsidiaries, the Drouot Group is a major player in the art market. Hôtel Drouot, located in the heart of Paris, has been the world's largest public auction center since 1852. 15 salerooms are available to more than 70 auction houses. The emulation generated by an annual offer of 230,000 artworks from 21 major specialities - from Antiquity to street art - attracts some 3,000 visitors every day. The Group's digital platform, Drouot.com, offers digital sales - Live auctions (live broadcasting and participation in auctions), Online-only auctions (dematerialised auctions) and Buy Now sales (sales of lots at fixed prices). Nearly 2 million items are offered annually by 600 auction houses. Auction news is reported every week in La Gazette Drouot, the leading weekly magazine for the art market and culture published by Auctionspress.
More about Drouot
Drouot certified auction houses
To buy
How to buy on Drouot.com
How to buy at the Hôtel Drouot
Glossary
Useful links
To sell
Value your property
Auctions at the Hôtel Drouot
Subscribe
SERVICES FOR PROFESSIONALS
Auctioneers
Art galleries
Contacts
HÔTEL DROUOT
9, rue Drouot 75009 Paris, France
+33 (0)1 48 00 20 00
[email protected]