Back to Catalog > ARTS OF AFRICA AND OCEANIA... 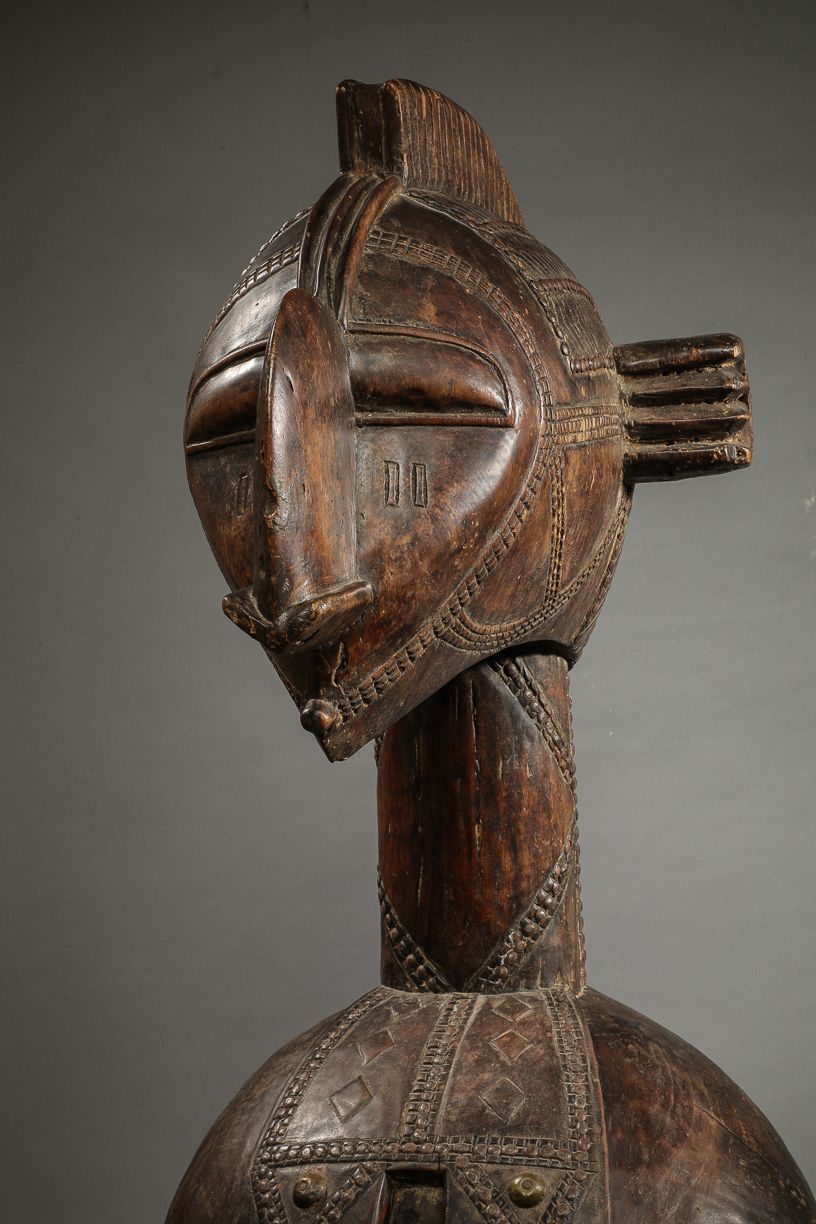 NIMBA OR D'MBA DIVINITY Republic of Guinea - BAGA H. 117 cm Hard wood with brown patina, brass nails, visible age cracks Large female bell-shaped bust mounted on four straight legs, symbolizing the fertility of of young wives and the fertility of the fields. This mask was carved in a huge wooden trunk: the bust corresponds to one fifth of the block fifth of the block, the feet to two fifths. The whole sculpture, except for the head and chest, was covered with a large costume. with a large costume. The imposing head is topped with a curvilinear crest, engraved with braids and chevrons. The domed face is marked by a sagittal axis in the axis of the beak-shaped nose under which a nipple-shaped mouth is sculpted. under which a nipple-shaped mouth is sculpted. Sculpted in a half-moon shape, the eyes appear inflated. A network of squared bands decorates the cheeks; the ears are very prominent and the cylindrical cylindrical neck decorated with a button at the nape of the neck has diamond-shaped scarifications on its front face. The broad chest, in the form of a plastron, has the same decoration with brass nails brass nails: the drooping breasts suggest that this woman gave birth to many children. Two holes between the breasts allow the dancer to see. The legs are pierced with the holes for the stretcher held by the assistants The legs are pierced with the holes for the stretcher held by the assistants who helped with the handling of this very heavy and unbalanced mask. The Nimba mask is one of the most emblematic sculptures of African art, It is also one of the most monumental, as few works reach such dimensions and such evocative power. It existed among the WAJA of Nigeria, but found its most accomplished form among the BAGA of Guinea. In Sierra Leone, the LIMBA wore it on their sides, without covering their heads for fear of the power it conceals. When this mask evolved, it towered over the audience, as shown in an engraving from 1886 in the magazine Le Tour du world, as well as the accounts of travelers who had seen it in the swamp islands of the BAGA. Releases of this mask ceased at the end of the 1950s, due to the proscriptions of Islam. Books on African art often refer to it as Nimba, the allogeneic name of the SUSSU; whereas the BAGA refer to it explicitly as D'Omar. explicitly under the name of D'mba.